Two assassination attempts were made on U.S. President Ford in 1975. He survived both. The construction of the Trans-Alaska Pipeline also began in 1975 and The Rocky Horror Picture Show was released in American theatres. In the same year, the name “Micro-soft”  (for microcomputer software) was used by Bill Gates in a letter to Paul Allen.

U&lc also began its second year of publication in 1975. The Volume No. 2 issues are chock full of terrific examples of illustration, calligraphy, handlettering and, of course, typeface design.

The first issue published in 1975, featured the work of Lou Dorfsman, the designer who oversaw almost every aspect of the advertising and corporate identity for the Columbia Broadcasting System (CBS) in his forty years with the network. Highlighted was his “Gastrotypographicalassemblage,” the icon he conceived for the CBS cafeteria. Commonly referred to as “the wall,” the typographic construction was – at 33 feet in length and 8 feet in height – enormous. More than 1,450 letters converged to create the experience. It was a mélange of food-related words and objects – and a perfectly orchestrated typographic collage of appetite. 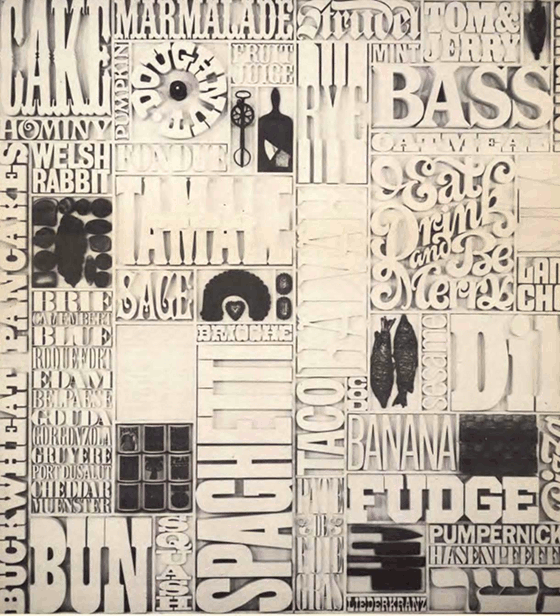 ITC announced six new typefaces in 1975, the ITC Newtext™, ITC Bauhaus™ and ITC Bookman™ families. (The latter has recently been updated as OpenType™ Pro fonts with all the alternate and swash characters of the original.) Also announced in the issues were the special ITC Cheltenham™, ITC Century™ and ITC Garamond™ designs.

Why is the latter trio of designs special? Because they were not intended to be the “free-standing” typeface families that they are today. Each was released in just Book and Ultra weights with complementary italic designs. They were intended to be used as display counterparts to the existing text versions of the Cheltenham, Century and Garamond designs from other type foundries. It wasn’t until later that ITC, under pressure from graphic designers requesting more designs, developed the additional weights and proportions for these typeface families.

The last issue in the Volume No. 2 series, proclaimed the winners of the first annual Upper and Lowercase International Typographics Competition. Today, this provides a peek at the best typography of 35 years ago.

Click below, and you will be rewarded with downloadable files of the second volume of U&lc.