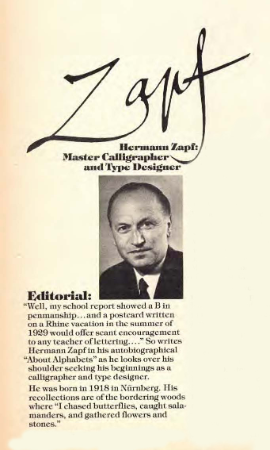 After a 10-year hiatus, Hermann Zapf began designing typefaces again in 1976 – and the first were announced in volume three of U&lc.

The Palatino®, Optima®, and Melior® typefaces are just some of the designs Zapf created early in his career. These typefaces were designed for Linotype at a time when type foundries chose not to cross-license their designs. Since his designs were – and still are – a vital component of any well-planned typographic offering, Linotype’s competition commonly produced virtual clones of Zapf’s typefaces to provide to their customers. After seeing this happen time and again, Zapf concluded that it was not intelligent – or profitable – to continue his career designing typefaces for others to plagiarize. In the mid-1960s, Zapf stopped designing commercial typefaces. Over a decade passed before a new typeface of his was released.

Zapf’s re-emergence into type design began when Aaron Burns founded International Typeface Corporation in 1971. The company was built on the principle that it would license typeface designs on a non-exclusive basis to any company that agreed to a relatively basic and straightforward business relationship. Three years later, on a cool October morning, Zapf visited Burns in his New York office. At their meeting, Burns was able to convince Zapf of the soundness of ITC’s business philosophy.

Upon returning home to Germany, Zapf wrote to Burns of his intention to design a new text typeface – which he would offer to ITC. In Zapf’s words, “The system worked out by ITC is the only way to get better conditions for type designers. So I will… carefully prepare my alphabet proposal for my new relationship with ITC…. The design will be a blending of Melior, Bodoni, and Walbaum as a special text face to which we may later add swash characters for display.” The blended design eventually became the ITC Zapf Book™ typeface family, which was released in the spring of 1976. The relationship with ITC continued, with Zapf designing the ITC Zapf International™ and ITC Zapf Chancery™ typefaces in 1976 and1978 and creating the ITC Zapf Dingbats® suite of characters in 1979. 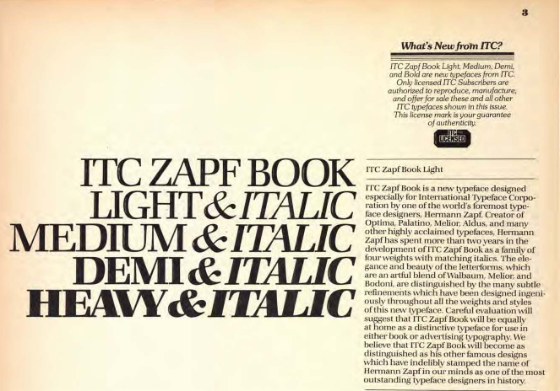 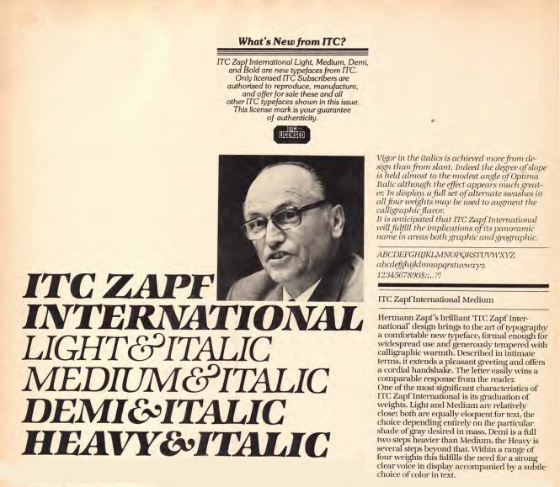 Click below, and you will be rewarded with downloadable files of the third volume of U&lc where you can read about Herman Zapf’s then new typeface releases – and feast on all the other great typographic treasures.