U&lc Volume Four: Historic Insight & A Look to the Future 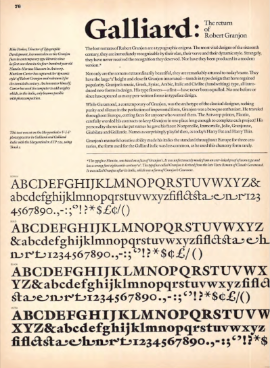 The advertisements in the old issues of U&lc can be great fun to look at. They provide glimpses into the typesetting technologies, type trends, and design fashions of the time. The advertisements, however, can also be great sources of typographic history – as in the case of the ITC Galliard® typestyle.

The availability of the Galliard typeface family was announced In the pages of U&lc, Volume Four No. 4 – except that it is not ITC Galliard. The announcement is in a Linotype advertisement. Galliard was originally a Linotype typeface.

Aaron Burns, President and one of the founders of International Typeface Corporation, was one of many who immediately fell in love with the new Linotype design. Burns also knew that the Galliard family would be a powerful addition to the ITC typeface library and tried, on several occasions, to convince Linotype management that Galliard would get more exposure – and would ultimately be more successful – if it was released as an ITC design. Each time, the request was politely declined. Seven years later, In 1981, however, Linotype capitulated and gave ITC exclusive rights to Galliard.

In addition to the great graphics that pepper the pages, three new ITC typeface families were announced in the Volume Four issues. Two of the issues are also devoted to “Vision 77” a three-day conference, sponsored by ITC, that explored the then new and merging technologies of word processing and typesetting. This is worth a read to find out what predictions came true – and what did not.

U&lc Volume Four also kicked-off the “Pro.Files: The Great Graphic Innovators” series of articles. These focused on the important graphic designers who profoundly influenced the direction of visual communication from the turn of the last century to the present. Well, until U&lc stopped running the series.

Click the PDFs below to find out lots more.