A Rare Evening of Typographic Camaraderie 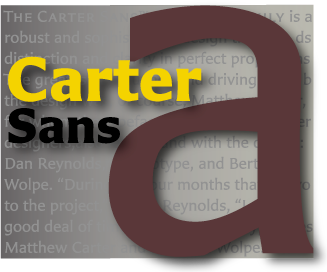 Few typefaces are released with the fanfare of the Carter Sans™ family – but then a new design from Matthew Carter is something of importance. Designers were treated to a sneak preview of sorts when the family was used as the graphic identity for the 2010 Art Directors Club Hall of Fame ceremony, at which Carter was an inductee. This was followed by the official announcement of the typeface earlier this year.  Which, in-turn, was followed by an unprecedented – and very special – event this week.

On Wednesday evening, San Francisco’s design community joined Carter at the Book Club of California in the celebration of the Carter Sans release. Also at the event was Dan Reynolds, Monotype Imaging’s senior type designer, who collaborated with Carter on the design of the family.

More than 90 graphic designers, art directors, creative directors and other lovers of type and typography filled the intimate venue. While primarily intended as evening of typographic amity, the event was highlighted by an informal interview of Carter by Patrick Coyne, publisher of Communication Arts magazine, and a brief slide presentation by Reynolds.

In the interview, Carter answered questions about what inspires his designs. “I don’t get inspired,” he said. “I work from a design brief – even if it’s my own. I show up; I put in the time, and I do the work.”

He also told the story about how the John Coltrane Quartet changed his life. “In 1960, I spent several weeks in New York visiting design studios and trying to find work,” Carter recalled. I didn’t have much luck, became discouraged and considered returning home to London. About that same time, I heard the John Coltrane Quartet play their first engagement.” Over several weeks, Carter heard them three or four times. “Sometimes they played the same song in the second set that they played in the first. Not because they were lazy but because they wanted to surpass themselves, or find something in the music that they hadn’t found earlier in the evening.” Carter decided that he owed it to himself to stay in New York. “Their seriousness of purpose was a lesson,’ he said. “Four great geniuses that would knock themselves out every night when they could have coasted.” This story is clearly a metaphor for Carter’s long and storied career.

After the interview, Reynolds presented slides detailing the process of his collaboration with Carter and the work that went into creating the large and diverse character set for the family. Carter recalled that the design of Carter Sans got off to somewhat of a rocky start but that he was delighted by the work that Reynolds brought to the project.

Questions from the audience ran the gamut from the value of type to branding – “It’s an invaluable part of the mix,” said Carter – IKEA’s replacement of the Futura® design with the Verdana® typeface – “while designed for on-screen use, it works quite well in their catalog,” to the future of fonts – “Web fonts are clearly the next important step in typographic communication.”

It was a rare and very special evening that will be remembered and retold.