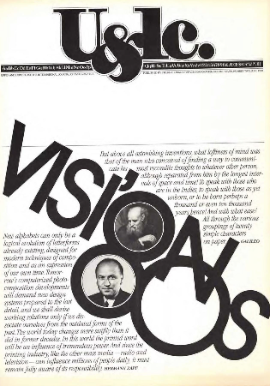 Ed Gottschall, the editor of U&lc in the late 1970s and early 1980s, loved technology. Although he wore a suit and tie to work everyday, he was a certifiable geek. He also had a lot to be geeky about. During his tenure as editor, the manner in which typographic content was set, output, stored and managed was going through dramatic changes. To celebrate and explore this abundance of communications technology, Gottschall prepared his “Vision ’80s” supplement to U&lc in Volume Seven Number Two.

“Vision ’80s” was a major undertaking that pumped the journal up from 80 to 180 pages. In the supplement, Gottschall presented a cornucopia of technological developments for creating textual content – and predicted its future. In several instances his predictions were right on target; in others, not so much. “Vision ’80s” was a report on the state of the art of creating content – and Gottschall was a great reporter. Reporting and predicting, however, are two very different things. Still, “Vision ’80s” is an excellent view into the future of yesterday.

Along with technology, Gottschall was also interested in the calligraphic arts. Volume Seven Number One, contains a call for entries for a calligraphy competition with the winning entries to be shown in the pages of U&lc – and in an exhibition at the ITC Gallery. While the ITC Gallery is long gone, the winning entries can be seen in Volume Seven Number Four.

ITC also announced four new typeface families in Volume Seven of U&lc. The first weights of the ITC Franklin Gothic™ family were announced in the first issue; which was followed by the ITC Fenice™, ITC Century™ and ITC Isbell™ families.