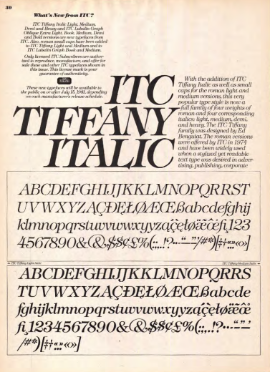 When new typefaces are released today, we expect them to be a full complement of designs and weights. It wasn’t that long ago, however, that typeface families grew much like your own: a little at a time – over a period of time. Such was the case with the ITC Tiffany™ and ITC Lubalin Graph™ typeface families.

ITC Tiffany and ITC Lubalin Graph were released in 1974. It wasn’t until 1981, however, (in U&lc Volume Eight Number 2) that their italic designs were announced. Why the delay? Because before the advent of design software, typefaces were drawn by hand – a time consuming and labor intensive process. ITC was a relatively small company and undertaking a new typeface design project was a major investment.

Which may beg the question as to why were the italics drawn at all. The answer is “technology.” More and more typesetting was being set digitally in the early 1980s – and it was a relatively easy process to digitally oblique a roman design to serve as a makeshift italic. The result did not look good to a typographer’s eyes, but that didn’t stop people from doing it.

The folks at ITC, however, were typographers – and it pained them to see their typefaces contorted and distorted into faux italic designs. Which is why ITC asked Ed Benguiat to draw new italic designs to complement the roman weights of Herb Lubalin, Tony DiSpigna and Joe Sundwall’s ITC Lubalin Graph and his own ITC Tiffany typeface.

The first “Directory of ITC Typefaces” (a specimen showing of all the typefaces released in the first ten years of the ITC’s existence) was also published in the pages of Volume Eight of U&lc – as was the announcement of the ITC Galliard™ family, a typeface design first released by another company. To find out what company first released Galliard – and to see what else was in the journal’s pages – click the PDFs below to download Volume Eight of U&lc.