Imagine you’re a young typeface designer, and one day you find yourself working with a living type legend, someone so accomplished that his typefaces read like a list of famous movie stars.

That’s exactly what happened to my co-worker, Nadine Chahine. She has worked alongside such greats as Professor Hermann Zapf and Adrian Frutiger, who between them have made the world a better place with timeless faces including the Palatino®, Optima®, ITC Zapf Chancery®, Frutiger®, Univers® and Avenir® designs.

This year, Nadine won a prestigious design excellence award from the Type Directors Club of New York City. Her award-winning family was Palatino Sans Arabic – a project she spearheaded with a nod from Professor Zapf, who created Palatino more than a half century ago. This was their second collaboration; the duo created Palatino Arabic, a design that three years ago also won a design excellence award from the TDC. 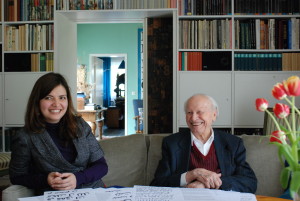 Although she’s elated to join forces with such star power (as her own is on the rise), Nadine is even more exuberant that Arabic type is gaining attention. She explains: “There is this burst of creativity that has taken the world by storm. Designing Arabic type is very IN these days, but that is not the reason for the jubilation. The really amazing part is that we’re exploring new horizons for typographic expression for a region that is fast changing and really pushing forward toward modernity.

“It’s great to be able to step out of the clichéd views of the Middle East (camels, tents, and in more recent years, a lot of gold) and be able to typographically present different facets of the complex and fascinating societies that inhabit this region. Change has come to the Arab world, and this translates so nicely into typography.” 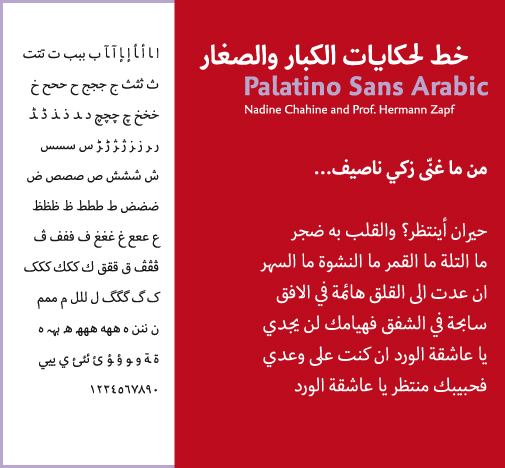