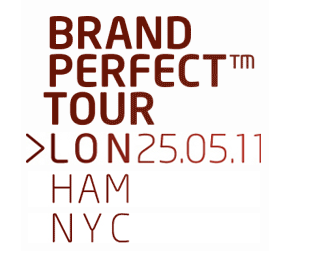 The Brand Perfect™ Tour kicked off in London this week with a capacity crowd of brands, agencies and developers. I started the day with a brief introduction setting the goals for this new forum to establish best practice for taking brands across digital platforms. This is the start of a new cross-industry Think Tank on multi-channel branded digital experiences.

Doug Wilson set some perspective, showing how the advent of mechanical typesetting and the Linotype® typecasting machine “the Twitter of its day” revolutionized communications in the late nineteenth and early twentieth century. He gave the audience a sneak peek of his ‘Linotype the Film,’ which includes interviews of Matthew Carter and Allan Haley. Doug drew comparisons with the current revolution in digital media and the fact that type has always been tied to technology.

The lively and varied presentations including examples of cross-media campaigns, ‘Thinking of You’ by O2 which focused on personalizing the approach and the hilarious and highly entertaining ‘Cats with Posable Thumbs’ for Cravendale and ‘Old Spice’ by Wieden and Kennedy. Neil Christie of W&K felt brand consistency was redundant. What users want is something unexpected, something to delight them. Marina Willer talked about the need to be able to flex the brand according to the goals, platform and message – not to constrain the brand, but let it evolve.

Fjord brought many of the concepts aired during the day together in their talk with an overarching focus on user behavior when designing for digital media. Appropriate user experience is more important in digital than rigorous control over consistent appearance.

The role of typography in communications and brand expression was presented by our own Nadine Chahine with considerable humor and highly appreciated by the Twitterati.

The key takeaways of the day were: a need to design for user behavior, hot debate about the role of the logo in branding and whether brand consistency is of value. Simon Manchipp of SomeOne declared the logo dead but then showed a lot of examples of icons designed for use in branding that looked suspiciously like logos to me… this debate was continued by the panel chaired by Patrick Burgoyne, editor of Creative Review.

The three master classes following lunch were well attended covering basic typography by Jonathan Barnbrook, using and choosing Web fonts by Daniel Rhatigan, and Ken Soohoo gave insight into the world of UI design for devices such as fridges, dishwashers and ovens!

Lots of convivial conversation in the bar brought the day to a close and bookings were taken for the next LON event on October 4 of this year.

See what people thought on Twitter @brandperfect, search #brandperfect…
A short movie is in production and photos are coming soon.

Sincere thanks to the entire team for all your hard work and amazing efforts!