“You don’t have an ounce of rhythm in your entire body! You should get out of here, go home, put on some Mozart, dance around for an hour, then try this again.”

Those were the words of a calligraphy teacher berating a student in front of a class some 40 years ago. No, the student was not Steve Jobs. But as you read, you’ll undoubtedly recognize a connection that explains Jobs’ affinity for type, and how he opened it up to the world and then some.

The story begins with Lloyd J. Reynolds, who founded a calligraphy program back in 1949 at Reed College in Portland, Ore., the same school Jobs would briefly attend years later. At the time when Reynolds ran the program, his class was the hottest ticket on campus, achieving standing-room-only status. So how could this course, which was taught until 1984, captivate students so powerfully? No other one-credit elective seemed to engage its attendees to the same degree.

According to an excellent article from the August 2003 edition of Reed magazine, from which much of this post is based, the “rise, reign, and fall of calligraphy at Reed is a tale of charisma, discovery, Zen, jealousy, spirituality, body vs. mind, the hand linked to the heart, a Trappist monk, the white paper between the lines – and, yes, above all it is the legacy of one brilliant, caring and cranky teacher: Lloyd J. Reynolds.” His course stretched beyond calligraphy to include typography, book design and printmaking using woodcuts. A passionate instructor, Reynolds sometimes blurted cutting remarks, like the ones at the beginning of this article.

Working for a brief time at a greeting card and sign company earlier in his career, Reynolds once said, “I asked questions about the letters and got no answers. There was technical skill there but no substance. There had to be more than empty mechanical knowledge.” Reynolds absorbed himself in calligraphy. Although he was self taught, he eventually became one of the best calligraphers in the country.

Reynolds became known for professing far beyond calligraphy, tying in the whole of the human condition and reaching into philosophical realms. As his students created works that could serve real purposes, he pushed them to extend themselves and to see below the surface. Imagine a room full of 20-year-olds, focused on the rhythms of their pen strokes while Reynolds took them on mental journeys spanning themes from Michelangelo to Zen Buddhism.

Reynolds spoke of change. He questioned why people feared or denied it when change also brought things that people value most. “Change being what it is,” he once said, “we’re going to lose everything anyhow; so what do we have to lose? Why don’t we, then, drop the hostilities and just live?”

Of course, change came to Reed College’s calligraphy program. Steve Jobs dropped in on the course in the early 1970s, but Reynolds had already left.

Reynolds retired at the beginning of the decade after his wife died. To take his place, he hired Robert Palladino, a former Trappist Monk and monastery scribe. Reynolds saw that Palladino believed clearly there was more to calligraphy than drawing letters. 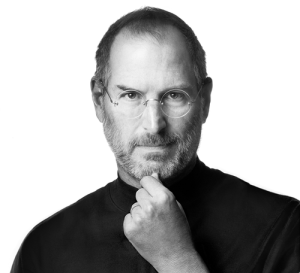 Jobs famously described what he learned from his calligraphy class at Reed during his Stanford University commencement speech in 2005. “Throughout the campus every poster, every label on every drawer, was beautifully hand calligraphed.” He went on to say, “I learned about serif and sans serif typefaces, about varying the amount of space between different letter combinations, about what makes great typography great. It was beautiful, historical, artistically subtle in a way that science can’t capture, and I found it fascinating.”

In that same speech, Jobs recalled that when connecting the dots of one’s life, you can only look backward. He said if he hadn’t dropped in on Palladino’s calligraphy class, he never would’ve introduced the Macintosh computer with multiple typefaces or proportionally spaced fonts. Jobs said that while the course seemed impractical at the time, it turned out to be one of the most priceless experiences of his life.

Although they probably never met, Jobs and Reynolds had much in common. Each found professions where they excelled and loved unconditionally.  Each was relentlessly driven. Each used their gifts to make connections and do great things, despite being at times cantankerous. In one case, the whole world benefitted, and in the other, a small student community became profoundly impacted.

If it weren’t Lloyd J. Reynolds, who died in 1978, Steven P. Jobs may never have had the opportunity to make typography matter to the world. Likewise, there’s most certainly someone out there today who never met Jobs, someone who’s a lot like him who will take the same passion and somehow change the world, again.