The goals of Letter.2 were two-fold: to promote typographic excellence and to provide a wide-angled view of the best typeface design of the last decade.

The competition jury met Oct. 1-2 in Buenos Aires to make its selections. Out of the 561 typefaces submitted, 53 were selected for recognition – five of these were from Monotype Imaging’s typeface libraries.

Rod McDonald had the first sketches for the Egyptian Slate typeface design in the works even before the original sans serif, Slate™ branch of the family had been released. He discovered that the openness of the letterforms in the sans serif Slate allowed him to add strong slab serifs without losing any of the character of the original design. To maintain visual parity between the two designs, McDonald had to change the basic weights of the new design and make adjustments on virtually all the characters to compensate for the added visual weight of the serifs.

McDonald drew the roman designs and collaborated with Carl Crossgrove of Monotype Imaging to create the italic counterparts.

Carl Crossgrove began working on Mundo Sans in 1991, prompted by his admiration for several humanist sans typefaces. For the heavy weights in the family, he drew inspiration from traditional hand-lettered signage, with its heavy sans caps, slightly flaring stems and humanist skeleton.

Crossgrove didn’t intend Mundo Sans to be revolutionary; rather, he sought to create “a design with subtle pen ductus, a wide range of weights, and a fluid, unobtrusive italic.” His aim was to keep the design clean and distinctive for display use, while still being understated and suitably proportioned for text composition.

The digital revival of Neue Haas Grotesk, as designed by Christian Schwartz, restores the essence and nuance of the original, iconic 1950s family.

Neue Haas Grotesk, which was to become the Helvetica® typeface family, was available as hand-set metal type in sizes ranging from five to 72 points. Each size required a different font, and each incorporated subtle design differences in order to achieve optimal reproduction of the typeface.

However, as machine-set typesetting overtook handsetting techniques, changes were made to the design to simplify production – but at the expense of aesthetic nuances. Over the years, various revisions of the Helvetica design improved the breadth and depth of the family but did not address the design nuances of the original Neue Haas Grotesk. These are now recaptured in Schwartz’s revival.

The Pirouette design is based on the characters in a logotype Ryuichi Tateno created for a 1999 packaging design project. In creating the logo, Tateno experimented with overlapping swash italic letterforms. These experiments continued beyond the logo project, taking on a life of their own – eventually becoming the Pirouette typeface.

The Pirouette family has six different elements. Pirouette Text, a finely drawn italic, is intended for passages of text copy. Pirouette Regular is more formal, with elaborate swash capitals, and is ideally suited to larger sizes. 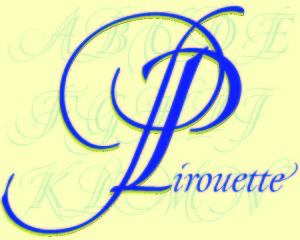 Veljović Script is based on the informal brush-drawn calligraphy of its designer, master calligrapher Jovica Veljović. Veljović Script’s letters generally do not connect, although Veljović drew several that will overlap, reflecting his calligraphic style. 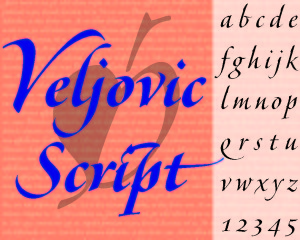 Each of the Veljović Script fonts contains hundreds of alternate and swash characters. The resulting typeface has much of the flexibility, versatility – and certainly the beauty – of calligraphic lettering. While remaining highly legible, there is a vibrancy in Veljović Script that is found in few typefaces.