Volume 16 - Something New And More Of The Same Great Stuff 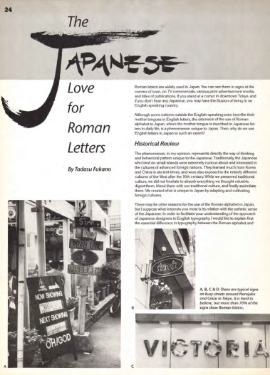 You may notice something different in the last two issues of U&lc Volume Sixteen. The table of contents, that normally ran on page one of each issue, is moved back several pages to make way for advertising. Letraset, primarily known as the premier provider of dry transfer lettering the 1970s and 1980s, had acquired ITC just a couple of years earlier – and the ads were for the company’s new line of design software and plug-ins.

I remember the general manager of Letraset in North American at the time telling me that fonts were a “mature” product with little hope for growth. “The future,” he said, “is in software. ITC’s main function will be to serve as a conduit to provide graphic designers with Letraset design software.” He didn’t realize that fonts were also quickly becoming software available to a much wider audience than he imagined. Which is why the folks that founded Monotype Imaging purchased ITC, and its typefaces, in 2000, even though it was abandoned by Letraset and reduced to a shell of its former self. Today, new typefaces are added to the ITC Library on a regular basis and it’s fonts are seen in everything from websites to smart phones – in addition to traditional hardcopy environments.

Along with the increase in advertising, U&lc continued its tradition of announcing new ITC typefaces. After many years and very many requests, a suite of italic designs was announced for the ITC American Typewriter™ family. Two new scripts, the ITC Flora™, and ITC Isadora™ designs by Gerard Unger and Kris Holmes respectively, were also announced in the same issue. The ITC Giovanni™ family, from Robert Slimbach, was first shown in Volume Sixteen Number Three, and a revival and extension of William Morris’ Golden Type by a team of young designers, Helge Jorgensen, Sigrid Engelmann, Bildende Künste and Andy Newton, as the ITC Golden Type™ family was announced in Volume Sixteen Number Four.

Also featured in the pages of Volume Sixteen were articles on the lettering artist, Michael Doret, a retrospective by Steven Heller of the Broadway caricaturist Al Hirschfeld – and a piece that provided insight into the Japanese love of Roman letters.

Click the PDFs below to find out what else was in U&lc Volume Sixteen.