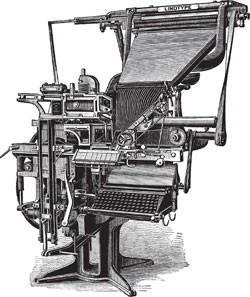 I saw a delightful film last night. It was insightful, humorous, poignant – and downright entertaining. The film was about a machine that revolutionized graphic communication, changed society in profound ways, and ushered in new heights in literacy.

“Linotype: The Film” is a feature-length documentary centered around the Linotype type casting machine. This seven-foot tall, two-ton, package of thousands of moving parts, called the “Eighth Wonder of the World” by Thomas Edison, revolutionized printing and culture. The film tells the surprisingly emotional story of the people connected to the Linotype and how it impacted our world – and theirs.

The movie, is a “must-see” for anyone involved in the graphic arts, anyone who is fascinated by technology, or anyone who just likes a good story. It features as cast of characters (pun intended) and cameo interviews with type designers like Nadine Chahine of Monotype imaging and Matthew Carter. The real stars of the film, however, are the Linotype machine and the remarkable people who were Linotype operators, repairmen, shop foremen and historians, who tell the Linotype story. Screenings have been in New York and Providence, Rhode Island; and more are scheduled for Boston, San Francisco, Seattle and Baltimore. There will also be a DVD available by early summer.

Type designer Nadine Chahine talking about the impact of the Linotype

Ray DesChamps at the Linotype in the Museum of Printing, North Andover, Massachusetts