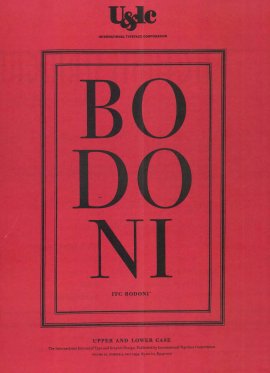 New Fonts, New Technology and Predictions For The Future

The pages of U&lc Volume 21 ushered in a typeface family extension, two new complete families, four single-weight display designs, eight Cyrillic family additions and a suite of fonts that took advantage of a new technology. Volume 21 also predicted the future of typeface design, and announced ITC Design Palette, a digital distribution center that preceded the Internet – but not by enough.

Friz Quadrata was used by graphic designers for almost 30 years before Thierry Puyfoulhoux drew its italic complement that was announced in Volume 21. Two typeface families, ITC Bodoni and ITC Edwardian Script, were also announced in the same Volume. The latter, by Ed Benguiat, found influence in the flowing character shapes drawn with a steel-point pen. Varying the pressure on this writing instrument – rather than the angle of the nib – produces thick and thin strokes.

ITC Bodoni was one of the most carefully researched and accurate interpretations of Bodoni’s typefaces ever attempted. The process involved two trips to Parma, Italy; hundreds of hours of research; and thousands more hours carefully designing fonts using one of the original copies of Bodoni’s 1818 Manuale Tipografico as a benchmark for accuracy. The complete story is told in Volume 21, Number 2. It’s worth a read.

The Cyrillic typefaces were a second edition of designs from ParaGraph, and included designs for both text and display applications. ParaGraph continues to provide ITC with new Cyrillic designs to this day.

The 8-page feature, “Timeless Typefaces,” in Volume 21 Number 2, collected the opinions and predictions of 21 type design luminaries. The predictions – and photos of the starts of the typographic community from 18 years ago – are great fun. 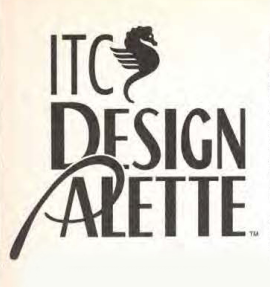 The idea behind ITC Design Palette was that it would make design tools like fonts, photographs, Iine-art and design software plug-ins available “24-7” at a click of a button. Sounds like the Internet, doesn’t it?

Trouble was, ITC Design Palette had nothing to do with the Internet. It was a box containing over a hundred CDs that sat on a designer’s desk. The CDs’ content could be browsed through an interface and downloaded to the designer’s computer desktop. When the content was licensed, ITC Design Palette would send a message over phone lines to a billing center that sent out monthly invoices. It seemed like a good idea at the time, but the growth and scope of the Internet made ITC Design Palette obsolete before any devices were delivered.

Click the PDFs below to find out what else was in U&lc Volume Twenty-one.