The Type of Olympians

With the opening ceremonies of the 2012 Olympic Games commencing today, we thought it interesting to explore the typography of Team USA and Team Great Britain’s websites, both of which feature selections from the Fonts.com Web Fonts service.

Adorned in a red, white, blue, gray and gold palette, Team USA’s site features a tiled interface of images overlaid with text set in Linotype’s Neue Helvetica 45 Light typeface. These lean letterforms are also contrasted with an abundance of more visually robust type used on the site; for example, the main navigation of the site features the Neue Helvetica 97 Black Condensed typeface, while rollover images are set in the family’s bold weight.

The site also features a herculean typeface family—ITC’s Aachen—used in supplemental headlines, and whose monolith-sized numerals count down the number of days until the start of the games. In addition, the Team USA word mark is certainly not shy either; its typographic weight presents an inherent confidence, while the angular construction of the letterforms project a keen strength and stability. Confidence, strength, and stability—perhaps fitting axioms for both athletes and typography alike.

London being the host of this year’s games, for comparison we can look at the typography of Team Great Britain’s website. Like Team USA, Great Britain’s web presence features large typography overlaid atop a series of images. Rather than employ the Grotesque Sans or Slab Serif styles of the Neue Helvetica and Aachen typeface families, respectively, Team GB’s site eschews these forms for the affable Geometric Sans style of the ITC Avant Garde Gothic type family. 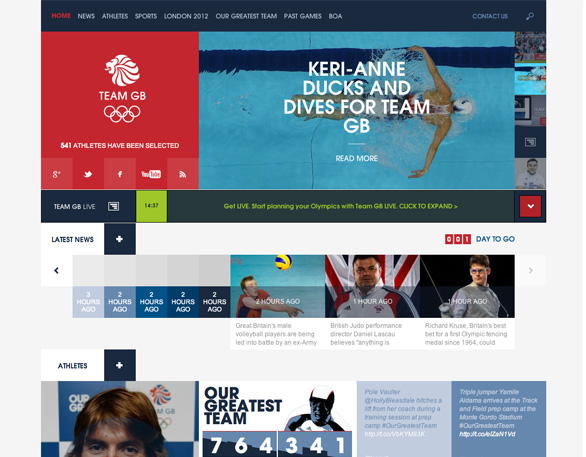 The website’s navigation employs the face’s medium weight, while headlines are set in both demi bold and bold styles. Despite only using the ITC Avant Garde Gothic type family for a majority of the site, the breadth and balance of the contrasting weights creates a pleasant visual hierarchy.

Interestingly enough, it should be noted that Team USA utilizes typefaces named for (and embodying) the Swiss ethos, as well as those crafted by two British designers who named the fonts after a German city. Conversely, Team Great Britain uses a typeface family inspired by the work of an American graphic design legend.

Even if nothing more than coincidence, through these typographic examples we can discover a metaphor for the the spirit of cooperation and cultural exchange the games strive to foster.