With more than a 100 locations across the United States, Ruth’s Chris Steak House is known for its premium culinary offerings. The restaurant’s website features large, dramatic photographs showcasing their decidedly well-composed dishes.

However, also interesting is the site’s restrained use of of typography; this aspect is not simply an oversight, but a quiet counterpoint to the image-laden layout of the website. The navigation of the site is set in the Novecento family, designed by Jan Tonellato for Synthview. Top navigation is set in the family’s medium weight of Novocento Wide, while the side nav is set in demibold. This entire sans serif family (it also is available in regular, condensed, and narrow widths, too) has a certain friendliness to it — in contrast to the overtly neutral letterforms of, say, grotesque typefaces. 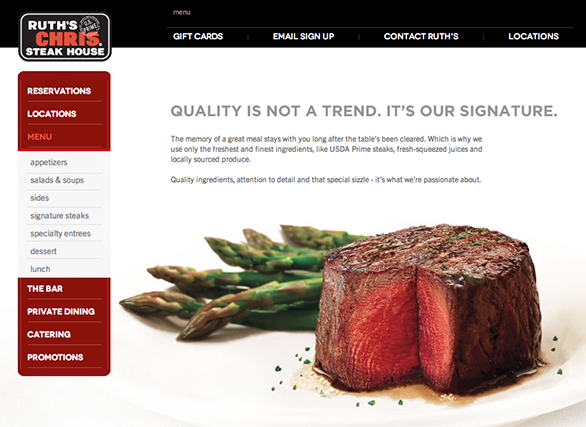 The Novecento designs are available in 32 styles, and the Trade Gothic Next Soft Rounded in 9, all through the Fonts.com Web Fonts service.