Now Over 2,000 Fonts for Rent Through SkyFonts

Johnathan Zsittnik in Archive on November 1, 2012

By now, you may have heard of our SkyFonts service. If not, SkyFonts is a first-of-its-kind font rental service that allows you to try fonts for a few minutes for free, or rent fonts using credits for a day or a month. SkyFonts was created with two primary goals. First, we wanted to provide designers with a better way to experiment with type before making a purchase. Second, we wanted to introduce a rental model that would allow designers to pay for type only as long as they needed it.

SkyFonts debuted in private beta last month and the feedback has been incredibly enthusiastic and positive. You’ve expressed interest in both trialing and renting fonts through SkyFonts and we’re excited to unveil new features and font releases that will improve both aspects of the service. We’ve accepted over 1,000 participants into the beta – just a fraction of the applicants. We’ve kept the test group small to allow us to keep up with the feedback. But if you’re still waiting to get in, good news awaits! We’re preparing to open the proverbial floodgates on the beta. Stay tuned to your inbox. Your invite isn’t far off. 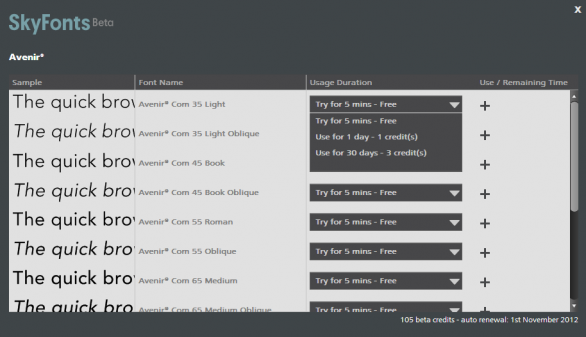 We have even better news for those already participating in the SkyFonts beta. We’ve just released over 350 fonts to the service giving us a selection of more than 2,000 quality fonts. We pulled some of the biggest names from our Monotype and Linotype collections, so you’ll see some familiar faces. Highlights include Monotype’s Abadi, Neo Sans, Rockwell and Soho families and Linotype’s Avenir, Eurostile, Frutiger and Univers designs.

Visit SkyFonts.com to sign up for the free beta and to try your hand at renting fonts.

Johnathan Zsittnik is the eCommerce Marketing Manager at Monotype Imaging. Johnathan holds both a bachelor’s degree in marketing and a master’s degree in business administration from Bentley University.