Many of the traits that are traditionally associated with Celtic and Irish Typography are actually vestiges of the ancient Insular script style, originated in Ireland over 1400 years ago. Insular scripts, which are identified by their unique letterforms, all-capital case setting and often-ornamented or flourished letters, heavily influenced the Gaelic and Irish handwriting and type design.

While insular-inspired typefaces are generally less-than-ideal for body text, these unique and attractive letterforms shine in display treatments. The whimsical strokes of Celtic and Irish fonts can be used to symbolize hospitality, heritage and wonder. When used properly, they add an air of timelessness and authenticity to a design. 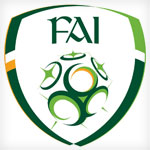 The Football Association of Ireland incorporates a custom wordmark in their crest that incorporates insular lettering. The letterforms of the “FAI” logo are very similar to our very own Colmcille typeface. 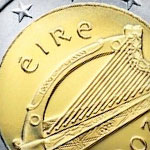 The Irish Euro features the insular text “ÉIRE” on the head of the coin, which is the Irish Gaelic name for Ireland. Note that despite being capital letters, the insular “E” is drawn with curved strokes, much like the latin lowercase “e”. 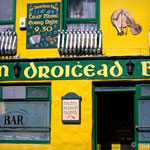 Irish and Celtic typography are frequently used in pub and restaurant branding. Irish pubs are known for their old-world hospitality and lighthearted atmosphere, and Celtic-inspired typography can instantly transmit these values to potential customers.

Typefaces that feature insular, celtic, and gaelic style scripts include 799 Insular, Kismet and Omnia Roman. Need to add an air of Irish authenticity to your project? Check out our full list of Celtic Typefaces.

Matt Brinkerhoff holds a bachelor’s degree in E-Business from Champlain College and has experience in user experience, multivariate testing, design and Web development. Through his work as a freelance designer, Matt developed an affinity for typography years before joining the team.