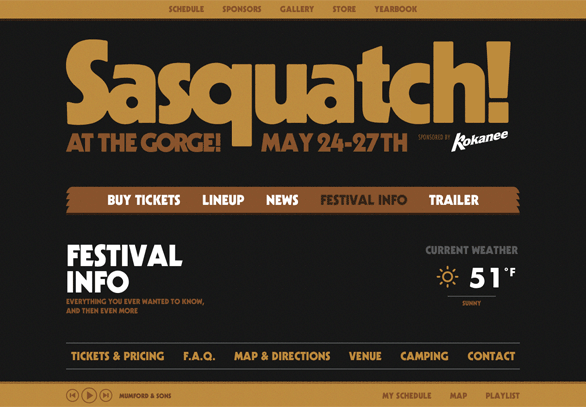 Occurring over four days at the end of May, the Sasquatch! Music Festival features an eclectic lineup of musicians performing at the Gorge Amphitheater in Quincy, Wash.

The festival’s site is a typographic delight. Utilizing colossal headlines and navigation elements all in the affable ultra weight of the ITC Kabel family, the site is reminiscent of 19th century broadsides — large, type driven, and visually arresting.

Despite the presentation being set almost exclusively in not only the same typeface, but the same weight of that selection, the use of scale as well as the muted, earthy color palette provides an engaging and navigable hierarchy.

In a slight divergence, the site’s body copy is set in the Futura family’s book weight. While certainly an aesthetic cousin of the ITC Kabel designs, Futura is decidedly more austere, making it apt for longer passages of text where former’s visually boisterous character would be to the detriment of the reader. The pairing works especially well given the contrast in the weights employed.

The ITC Kabel family is available in five weights, from the reserved book style to the hulking (yet charismatic) ultra weight. The Futura family is available in an expansive 20 styles, with weights from light to extra bold, including companion condensed widths as well. Both typeface families are available for desktop licensing, as well as online use through subscriptions to the Fonts.com Web Fonts service.