Toasting Bill on his 133rd

I first met Bill Dwiggins when I was quite young. I grew up in Hingham, Mass., and was one of the neighborhood kids who attended his marionette shows. Later on, I started dropping by Bill’s studio every now and again to watch him carve the marionettes. 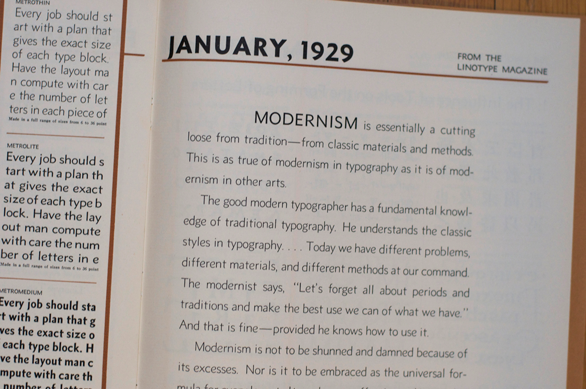 Today is Bill’s birthday. If he were still around, he’d be 133 years old. Bill was always a bit of a kid about his birthday. It was a special day for him. So, Monotype invited me to write this post for two reasons: to toast Bill’s birthday and to share the news that they are almost finished working on a revival of one of Bill’s most important typeface designs.

Monotype’s suggestion that I write a note honoring my friend falls happily with my mood. Moreover, It also gives me the opportunity to clear up a point about his association with me. From time to time, it’s been implied that Bill and I were the same person. This is complete nonsense and was disproved some time ago. Bill and I submitted our individual thumbprints to a prominent Boston typographer for scrutiny. When enlarged, one could clearly see that the whorls of my thumbprint were composed of Fraktur letters, while those of Bill’s were fleurons joined in an engaging pattern.

Bill drew a raft of typefaces during his years as a freelance designer for Linotype. A goodly number of them have been pressed into service as popular digital fonts. The one that most deserves a makeover, however, is Bill’s first: the Metro typeface. Not that it wasn’t a good design. It was indeed, but it’s always been a small family, and Bill was hamstrung by Linotype’s penchant for duplexed fonts. (This is where a pair of styles – such as roman and italic – were cut within the same mold for use in the printing process.) This meant that all characters were required to have the same width. I certainly anticipate that Monotype’s designer for the revival project will have resolved these limitations.

Something I hope Monotype doesn’t eliminate is the profusion of alternate characters Bill drew. Bill liked to have fun with his work, and his playfulness was apparent in several characters of the original Metro design. The cap Q and lowercase g and e come to mind – but I know there were more. They were pretty lively, and didn’t look like anything you might find in the Futura or Erbar families, which were designed around the same time.

It seems that some pompous printers back in the 1930s didn’t like this aspect of Bill’s design. These were hard-pressed folks who persuaded Linotype to replace the characters in question with ones that were about as stuffy as these people were. After that, you could only get the original characters by special order.

Well, Happy Birthday to Bill – and the best of luck to Monotype. I’m looking forward to seeing that new design.

Click here to learn more about the new Metro family.

Dr. Hermann Püterschein is President of the Society of Calligraphers and a noted typeface & typographic critic. He can be reached at [email protected]