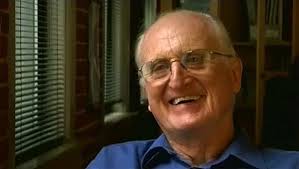 Mike Parker passed away earlier this week. For decades, Mike was instrumental in building the type community we enjoy today. Under Mike’s leadership as Director of Type Development at Linotype in late 1950s into the early 1980s, over 1,000 typefaces were added to the Linotype Typeface Library – at a time when creating new typefaces was a much more arduous and time-consuming task than it is today. Mike was responsible for bringing the Helvetica®, Optima® and Palatino® typefaces to North America. In addition, he was the person behind Linotype’s design relationships with Matthew Carter, Adrian Frutiger and Hermann Zapf.

Mike was also a pioneer with digital type. He was responsible for the first typographic fonts made available for laser printers and was a co-founder of Bitstream, the first independent digital typeface foundry.

Mike’s intelligence, drive, ambition, stature, and booming voice, all helped to give him a bigger than life presence. And Mike was controversial – and, at times, a rascal. There are hundreds of stories about Mike, his accomplishments, ventures – and misadventures. When I sent my condolences to Harry Parker, Mike’s son, I received the following reply.

“Thank you for your kind thoughts. My dad will be missed. He recently shared with me that he felt his life was lived to the fullest, that his time was near, and that he had no regrets. While I am filled with loss and sadness at his passing, I know that he would prefer we celebrate his life. If you find yourself talking with someone else who knew him, please just tell your best Mike story. It is what he would have wanted.”

I have my share of Mike stories. If you have good one, tell it to someone.